SIMEDHealth CEO, Dr. Dan Duncanson, takes a moment to thank all our patients for their generous donations of food and face masks, their support, and hard work towards keeping Coronavirus contained. The fight is not over, but we appreciate everything you've done so far. ❤️

If you are not able to view the video, click here. 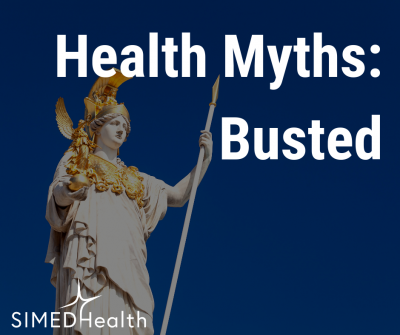 Myths are often created to give an answer to something we couldn't explain. But even after the tales are disproven, they continue to be prevalent. We talked to physician and CEO Dr. Dan Duncanson about some of the more common health myths and why they are not real.

There are many different claims in this myth. For example, the aluminum in antiperspirants can seep into the skin through microtears created by shaving, get into the lymph nodes, and cause cancer. It is also said that parabens are another concerning ingredient in deodorants. And that breast cancer is most common in the area found close to the armpit because this breast region is closer in proximity to the armpit lymph nodes that are exposed to antiperspirants.

Dr. Duncanson tells us that parabens and aluminum are not anything that anyone needs to worry about. Parabens are a group of compounds found in lots of different products whose primary function is to preserve whatever the product is. Makeup, skincare, and some food products contain them.

A 2004 study done found parabens appeared in some samples of breast tissue, but the study did not show how they got there or they caused or contributed to cancer.

A similar result occurred when testing the aluminum in antiperspirants. Only a small fraction of the aluminum in this product is absorbed. Even then, the study did not find a higher amount of aluminum in breast cancer tissue compared to healthy tissue. "The available research does not show a correlation between deodorants and breast cancers," says Dr. Duncanson.

There is also not any hard evidence showing the location of breast cancers is related to using antiperspirants. Breast cancers typically occur in an area that has the most amount of breast tissue. For the majority of people, that would be the upper outer quadrant, the area closest to the armpit.

Dr. Duncanson says that our mucus is our protection. "It keeps our mouth, nose, sinuses, throat, lungs, and gastrointestinal tract hydrated and is part of our defense system. When we aren't sick, our phlegm tends to run clear. But if we get a cold or sinus infection, our mucus can turn an unpleasant yellow, white, or green color. The change in color in the snot comes from an increase in white blood cells present in the phlegm, which are breaking down whatever is causing the infection," says Dr. Duncanson.

The issue with this myth isn't that its completely untrue, its because it isn't always accurate and shouldn't be the measurement people judge their illnesses by. There may be instances where a patient's mucus is green or yellow for no reason at all. Unless a person is showing other signs or symptoms of being sick, they shouldn't assume they are ill just because of the color of their mucus.

This myth probably stemmed from a diet created by a doctor in 1965 that he thought would help children with ADHD or other attention and behavior issues. He theorized that hyperactivity was caused by artificial preservatives in foods and high amounts of sugar. This idea caught on, but research overtime did not find evidence supported it.

Situations where kids and adults are taking in high amounts of sugar are commonly at social events like birthday parties, carnivals, or Halloween. Dr. Duncanson says this sugar high is actually just the parents' perception, and the hyperactivity may be more due to the situation than what was ingested.

It seems reasonable that consistent and deliberate cracking of finger joints would down the line cause problems, for example, arthritis. Fortunately for people that crack their joints, this not valid.

All of this to say, as long as there isn't any forceful attempt to manipulate the joints in directions they don't want to go, there is a minimal chance any purposeful cracking is going to cause any injuries or long term ailments.

Health Myth Number 5: You Should Drink Eight Glasses of Water a Day

In this instance, drinking eight glasses of water a day shouldn't be the standard but instead just staying hydrated should. Dr. Duncanson made it very clear that everyone is different, and everyone will need different amounts of water based on their weight, measure of physical activity, the heat outside, and more. Along with that, we get water from the foods we eat and other liquids we drink.

Dr. Duncanson says, "It is important to stay aware of your thirst,"  and that will be the best measure for how much fluid needed per day. "Remember, anything you drink is mostly water, so drink enough fluid so that you don't become thirsty."