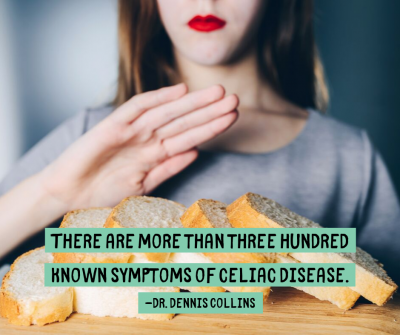 83% of people with Celiac Disease are undiagnosed or misdiagnosed. Every year on September 13th, we celebrate Nation Celiac Disease Awareness Day to share knowledge on this invisible illness. We talked to Dr. Dennis Collins of SIMEDHealth Gastroenterology on this subject.

1. What is Celiac Disease?

"Celiac disease is an autoimmune disorder in which people cannot eat gluten because it will cause damage to their small intestines,” says Dr. Collins. Specifically, the protein in gluten that damages the small intestine makes it nearly impossible for the body to digest nutrients which leads to malnourishment among other issues.

2. What are the symptoms of this disease?

3. What is the connection between celiac and diet?

Many common foods contain gluten, so make sure to always check the following for "gluten-free" foods: beer, bread, cake, cookies, pies, cereal, crackers, potato chips, french fries, pasta, hot dogs, lunch meat, salad dressing, sauces, and soups. This does eliminate a good portion of popular foods which makes the transition difficult, but it is worth it in the long run.

Hidden sources of gluten include medications, vitamins, and supplements, lipstick and lip balm, communion wafers, eggs at restaurants, play dough, toothpaste, and mouthwash. Sufferers can never be too careful.

4. What can be done to treat celiac disease?

Unfortunately, there are no drugs that treat celiac disease.  A strict gluten-free diet is the only way to control this disorder. It may seem like an overwhelming task to cut out gluten, but there are many online resources, along with talking to a doctor that can make it seem less daunting.

Click here to schedule an appointment with Dr. Collins today!