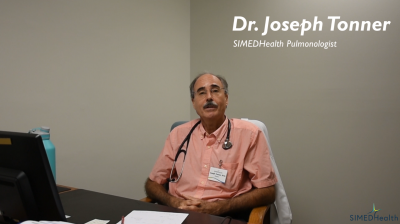 November is Lung Cancer Awareness Month and we sat down with Pulmonologist Dr. Joseph Tonner. Dr. Tonner explained the types of lung cancer, what its main causes are, and some preventative steps that patients can take. If this video is not shown below, click here. 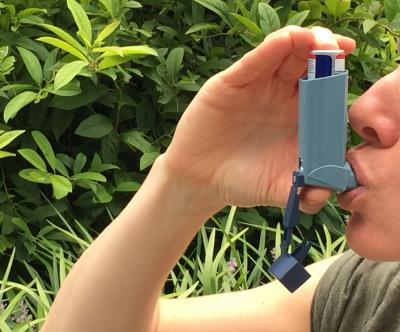 Almost 15.7 million Americans have been diagnosed with COPD, but more than half of adults with breathing problems do not realize they have COPD when diagnosed.

If you’ve had problems breathing and coughing, you could have COPD. Learn the signs and what you can do to relieve the symptoms with SIMED Pulmonology and Sleep Medicine Dr. Joseph Tonner on World COPD Day (November 15).

Think of a venn diagram where emphysema, chronic bronchitis, and chronic asthma are three interlocking circles. Most people would be right in the middle or somewhere in between. People can have smoking-related COPD or asthma-related COPD.

Patients are rated with a GOLD criteria for COPD that ranks them from 1-4. The worse the patients get, the more medicine they need to try or add. If patients have extremely severe COPD, they get triple therapy that includes all three drugs discussed below. 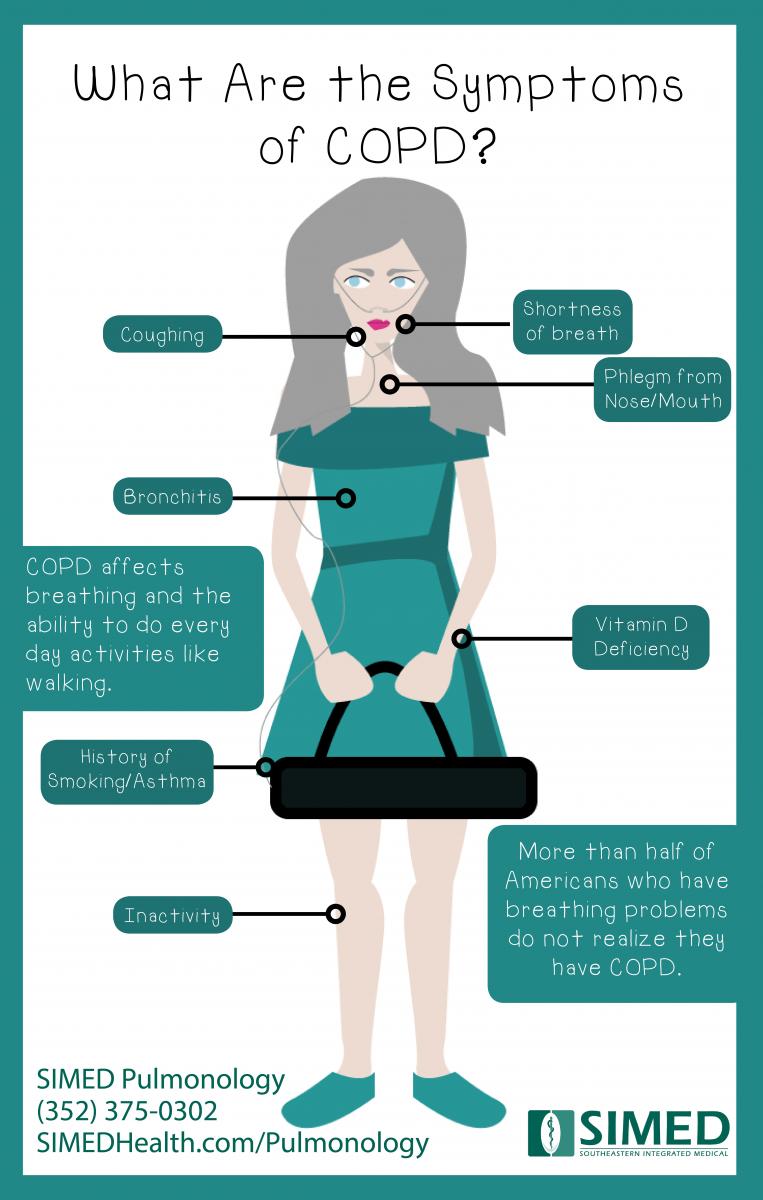 COPD is seen more as a systemic problem than just a lung problem. It’s a low grade inflammatory problem.

A majority of patients have:
- Vitamin D deficiency
- Frequent bouts of bronchitis
- Shortness of breath
- Coughing
- Inactivity
- A history of smoking or asthma
- Phlegm

If patients are not on chronic steroids, they also become more prone to osteoporosis (bone weakness).

Before people see a pulmonologist, they have usually already gotten cardiac work done and know they’re not anemic and don’t have another disease. Many have shortness of breath.

A lot of times, the general practitioner made the diagnosis, but on occasion, the pulmonologist will discover the COPD. If people are short of breath and know it’s a problem with their lungs, not their heart, they should see a pulmonologist.

Pulmonary Function Testing (PFT) is usually done to determine whether people have COPD and the severity of the COPD. PFT is the gold standard of diagnosing COPD. It has three parts:

1. Spirometry – blowing out forcefully
2. Lung volume – which is performed in the body box
3. Diffusion capacity – a measurement of how easily oxygen transfers across the lung membrane

PFT testing can be done through SIMED Pulmonology. If results are still confusing, a pulmonologist might also do a high resolution CT scan, which they have at SIMED.

Patients with COPD often times adjust their lifestyle because they are short of breath. Many end up becoming inactive, which ends up being a problem. If you don’t use it, you lose it, as the saying goes.

Most patients want to get around better, and to do that, patients need to strengthen the muscle groups so they can do the same level of activity with a little less effort. Physical therapy helps with that.

Get Vaccinated if you Have COPD

Patients with COPD are more susceptible to infection. They should get an annual influenza vaccine which is offered through SIMED Primary Care doctors and SIMED Urgent Care.

They should also get vaccinated against the Pneumococcal disease with the Prevnar 13 vaccine and Pneumovax23 vaccine. The vaccines are a source of confusion because some patients do not understand they are both needed to prevent against the same disease.

The Pneumovax23 covered 23 strains of the disease, but an additional 13 strains were found and added to the new vaccine, Prevnar 13. It’s important to get both even though you might already have one.

Treatment with Inhalers and Nebulizers 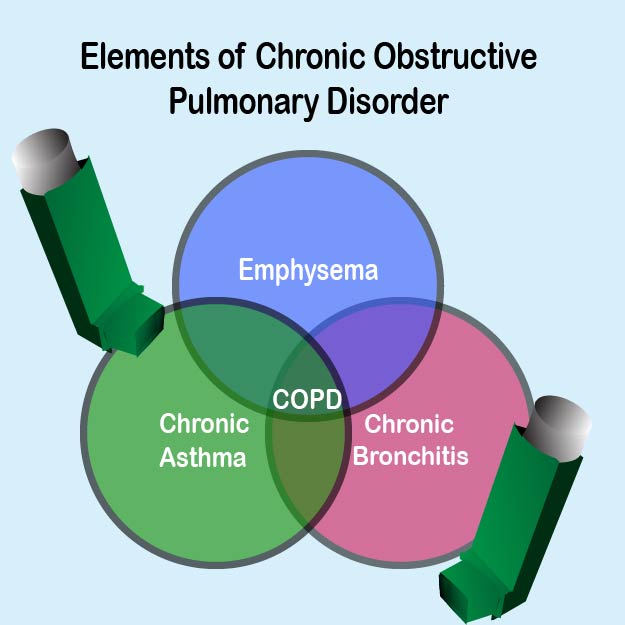 People who have smoking-related COPD do not usually get relief from inhalers, but patients who have asthmatic components to their COPD almost always get relief from inhalers. For people who have chronic asthma, the chronic airway inflammation can lead to obstruction of the airways which is one category of COPD. Asthmatic COPD can be partly reversed if the obstruction is fixed.

There are 40 inhalers that currently are available to people with COPD, and each has at least one of three different types of drugs. The drug types are:
1. Albuterols
2. Anticholinergic Bronchodilators
3. Inhaled Bronchodilators

Each interacts with the body in a different way. Inhalers may include one or two of the drugs. None so far have all three, but that may change soon as the US Food and Drug Administration recently approved an inhaler combining all three drugs to treat patients with COPD, according to The Telegraph.

Patients who do not use inhalers, either because they can’t afford one or because the inhalers are unsuccessful, can use a nebulizer solution. All three drugs found in inhalers can be put into a nebulizer, which is a liquid medication you can take with a machine that slowly feeds the medication into your mouth.

Inhalers can be a good option if they’re successful, but patients can run into problems with the price of an inhaler prescription. Inhalers can cost upwards of $300 a piece, even with insurance, so sometimes people simply can’t afford them. Sometimes, coupons can offer discounts to patients.

Patients may also be able to get inhalers through DME (Durable Medical Equipment) companies because they have their own pharmacies. The DME pharmacies can ship the medications to patients at a low cost, but even then alternative options may need to be considered.

Usually if patients still can’t afford the inhalers, they can consider using nebulizers which are a less costly alternative to inhalers at lower cost per quantity.

Treatment for People with Bacterial Bronchitis

If patients are found to have bacterial bronchitis, they are treated aggressively with a lot of oral antibiotics. These patients may be more steroid-responsive, so when they have an exacerbation, they get really queasy and need a short course of prednisone.

For Smokers, Quitting is the Most Beneficial Treatment

The most important thing a smoker with COPD can do is quit smoking. It’s more important than all of the medications available. While smoking is a hard habit to quit, it’s key to improving lung health.

If you’ve never tried quitting, you would first want to try to quit without medication. You could try dropping one cigarette a week, and some patients have even quit cold turkey. They made up their mind to quit and just stopped. Most patients need help though. They can take medications like Zyban or Wellbutrin. The medication with the highest one year quit rate according to journal articles is Chantix, but it has a number of side effects.

There’s help out there to quit smoking, but if you’re not contemplating breaking the habit, there’s no “magic pill.” A person has to be contemplating quitting to be successful. There are many options and treatments available for people with COPD. The most important step towards treatment is getting diagnosed and speaking with a doctor if you have any of the symptoms.