We Strive For Immunity 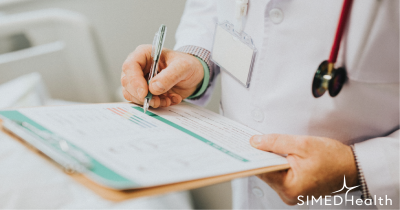 World Immunization Week is an annual week-long event the last week of April that promotes the benefits of vaccines in the hopes that we continue to protect all people from dangerous diseases. We talked to Dr. Scott Wilson of SIMEDHealth's Urgent Care about what vaccines are why they are so important.

What is a vaccine?

Dr. Wilson says, "A vaccine is a preparation of either biological components, parts of a germ-bacteria or virus, or small amounts of the germ, bacteria or virus, that is used to create active immunity to a particular disease, bacteria, or virus." This process is familiarizing the body with the specific virus, so if it ever comes across it, it will know how to attack it. Someone getting a vaccination begins the process of widespread immunity from it, which is the goal of vaccinations.

Why are vaccines necessary?

The overall importance of vaccines is to help prevent all sorts of dangerous diseases and hopefully over time, eradicate certain conditions that are caused by bacteria or viruses around the world like smallpox and polio, Dr. Wilson says. There is a reason disease such as diphtheria, measles, German measles, whooping cough, and mumps to name a few are so rare. The more people have that disease's vaccine the fewer people that will be susceptible to getting it.

Is there any reason why someone should not or would not be able to get a vaccine?

A primary reason not to get a vaccine is if the patient has ever had a previous adverse or allergic reaction to the vaccine. Dr. Wilson says, "based on the type of vaccine, there are certain times of life, for example, pregnancy, or if a patient has a specific disease that may be contraindicated to getting a particular vaccine."  It is possible to check the CDC website to see what the contraindications are for each vaccine.

Also, the CDC has schedules for catch up vaccinations as well as plans for regular adult vaccinations if someone was not vaccinated as a child.

Do vaccines cause autism?

No, there have been scientific studies that do not show any relationship between vaccine use and the development of autism, Dr. Wilson says. There have been lots of talks recently about the possible damages that can be done by vaccinations, but there is no evidence to show that any of that is true.

If someone does not know if they are vaccinated or not, what can they do?

For a majority of the previous vaccine, there are lab tests that can be done to determine if a patient has the immunity of a prior vaccine or if they have had the disease. There are a few vaccines that do not have a blood test to check immunity, such as tetanus, diphtheria, pertussis, and influenza.

What are other things you treat at urgent care?

Click here to find out more about Dr. Wilson and our Urgent Care.

Get the Facts about Drug and Alcohol Use 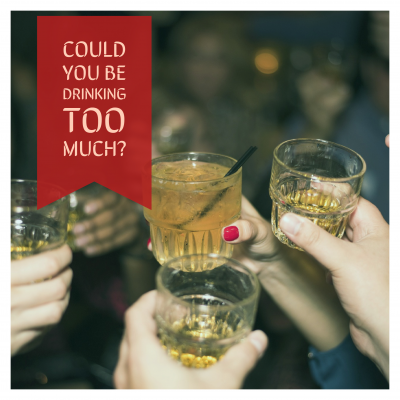 Heavy Alcohol Use: The Substance Abuse and Mental Health Services Administration defines heavy alcohol use as binge drinking on 5 or more days in the past month

Certain people should avoid alcohol completely, including those who:
1. Plan to drive a vehicle or operate machinery
2. Take medications that interact with alcohol
3. Have a medical condition that alcohol can aggravate
4/ Are pregnant or trying to become pregnant

Short-Term Consequences of Intoxication (being “drunk”):
1. An intoxicated person has a harder time making good decisions.
2. A person is less aware that his/her behavior may be inappropriate or risky.
3. A person may be more likely to engage in risky behavior, including drinking and driving, sexual activity (like unprotected sex) and aggressive or violent behavior.
4. A person is less likely to recognize potential danger.

Long-Term Consequences of Binge Alcohol Use or Use of Alcohol in Large Amounts: 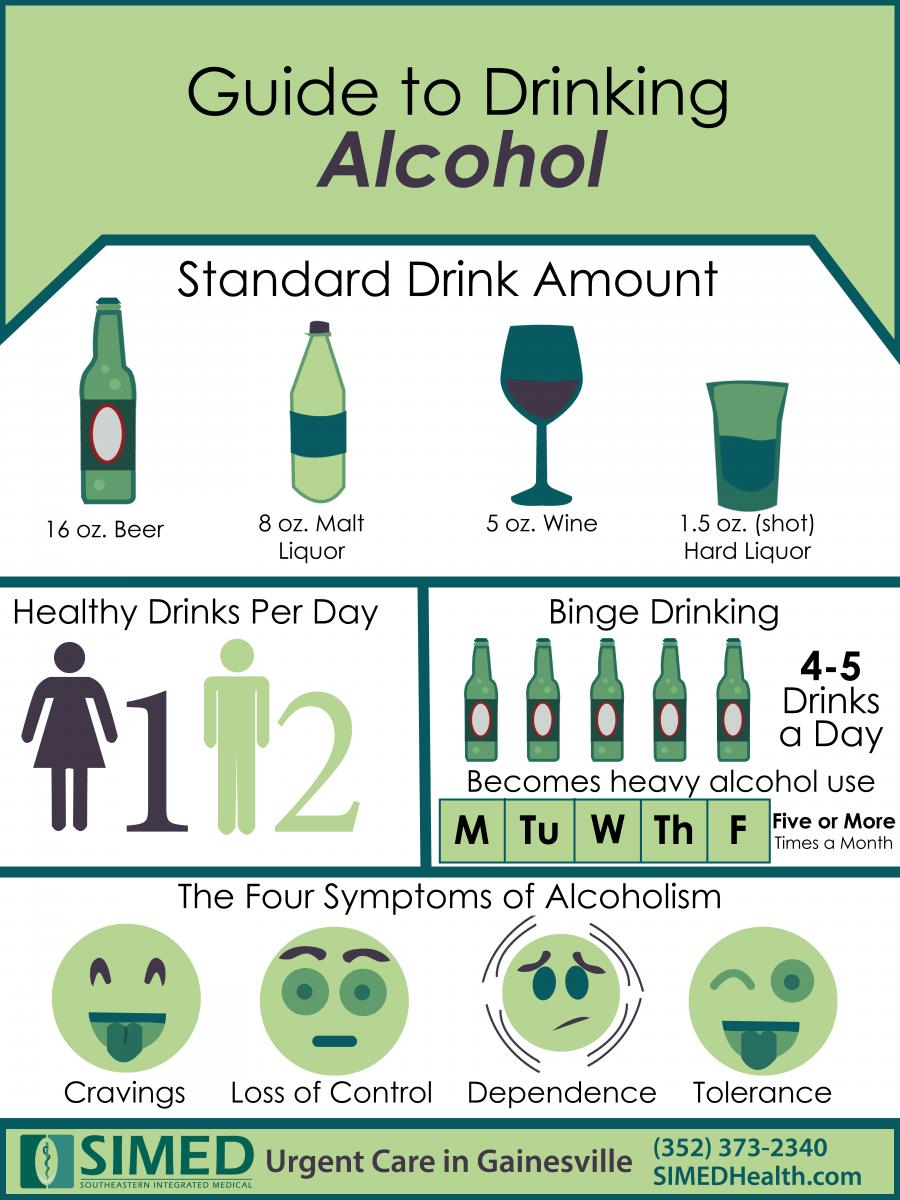 Alcohol poisoning occurs when there is so much alcohol in a person’s bloodstream that areas of the brain controlling basic life-support systems—such as breathing, heart rate, and temperature control—begin to shut down. Symptoms of alcohol poisoning include: confusion, difficulty remaining conscious, vomiting, seizures, trouble with breathing, slow heart rate, clammy skin, dulled responses, such as no gag reflex (which prevents choking), extremely low body temperature and finally, death.

Alcoholism or Alcohol Dependence consists of four symptoms:
·         Craving: a strong need, or compulsion, to drink.
·         Loss of control: the inability to limit one’s drinking on any given occasion.
·         Physical dependence: withdrawal symptoms, such as nausea, sweating, shakiness and anxiety, occur when alcohol use is stopped after a period of heavy drinking. Serious dependence can lead to life-threatening withdrawal symptoms including convulsions, starting eight to twelve hours after the last drink. The delirium tremens (D.T.’s) begins three to four days later where the person becomes extremely agitated, shakes, hallucinates and loses touch with reality.
·         Tolerance: the need to drink greater amounts of alcohol in order to get high.

Drug addiction risk is made up of a combination of factors such as:
(a) Genetics-genes that you are born with can make up about 50 % risk of developing addiction
(b) Environment-the influence of family, friends, economic status, quality of life
(c) Development-there are critical developmental stages in a person’s life that may be affected by use of drugs which will lead to addiction

Effects of Drug Use on the Brain:

Initial Effects: The initial effects of drug use on the brain is directed at the brain’s pleasure/reward circuit. The drug causes the release of large amounts of Dopamine, a chemical messenger in the brain that controls the body’s ability to feel pleasure and motivates the person to repeat behaviors needed to thrive such as eating and spending time with people we love. If you overstimulate this reward/pleasure circuit with drug use, this creates an intense pleasurable high that can lead people to take the drug again and again to achieve that high 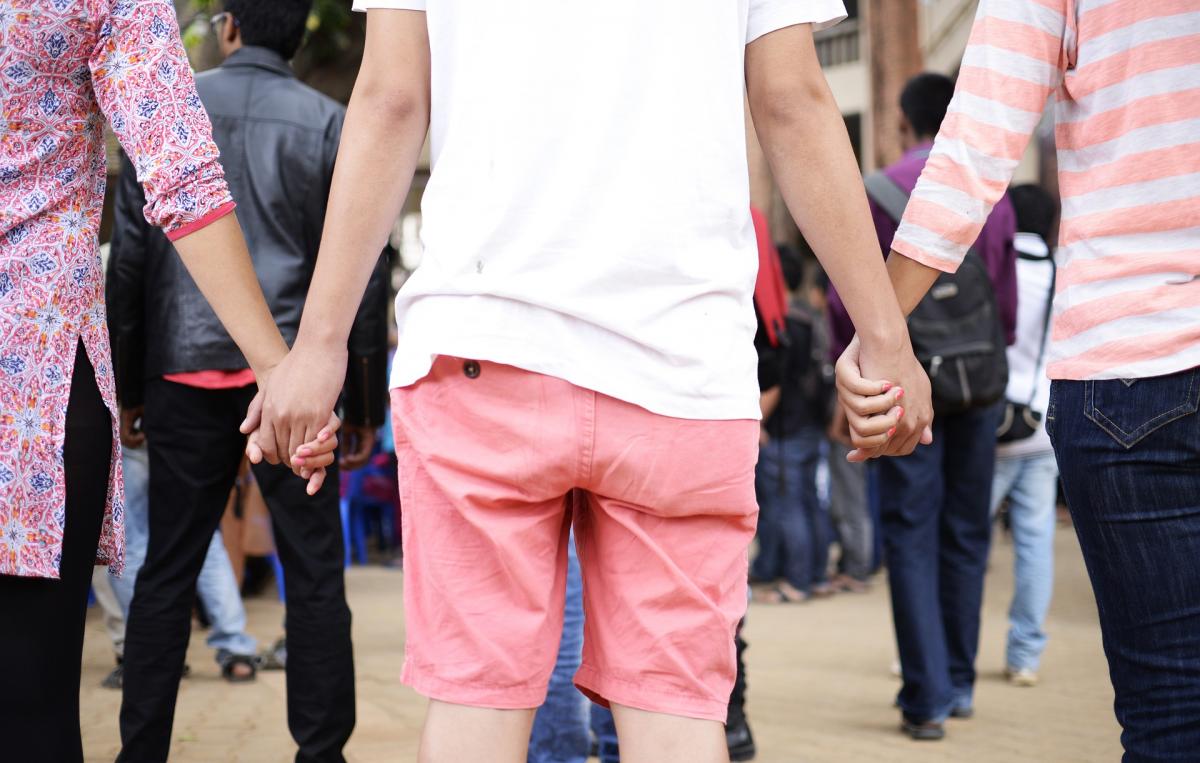 Tolerance: As drug use continues, the brain adjusts to the presence of excess dopamine by either making less of the dopamine and/or reducing the ability of the brain cells to respond to the dopamine. This reduces the high the person feels with continued use of the drug leading to tolerance. Tolerance leads the person to use more of the drug to achieve the same initial intense pleasurable high.

Long -Term Effects: The long-term use of drugs causes changes in the other chemicals in the brain leading to problems with: (a) Behavior, (b) Learning, (c) Memory, (d) Decision Making, (e) Judgement, and (f) Dealing with Stress. Repeated drug use leading to these changes in the brain that challenge an addicted person’s self-control and interfere with their ability to resist intense urges to take drugs. These brain changes can be persistent, which is why drug addiction is considered a "relapsing" disease—people in recovery from drug use disorders are at increased risk for returning to drug use even after years of not taking the drug.

Drug use/addiction is a treatable and managed condition. Drug use/Addiction are also preventable with involvement of parents, teachers, and health care providers in the education of young people to the hazards/pitfalls of drug use/addiction.