Should I Get My Flu Shot? 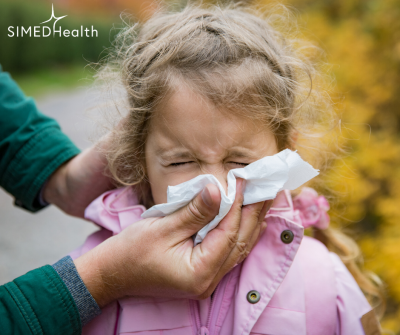 In the 2016-2017 season, the flu vaccine prevented 5.3 million people from getting influenza. The first week of December is National Influenza Vaccination Week. Data has shown that fewer people get their flu vaccinations, after November, according to the Centers for Disease Control and Prevention. We talked to Dr. Calvin Martin of SIMEDHealth First Care, and he stressed that it is never too late to get a flu shot.

Influenza, also known as "The Flu," is an infectious disease caused by the influenza virus. Influenza can infect animals and humans, with primarily two types affecting humans, Type A and Type B.

There are parts of the world where Influenza viruses are active throughout the year. However, in the United States, these viruses typically increase in activity and prevalence in late autumn the winter months. There are many different subtypes of the Influenza virus, and several can develop into the predominant subtype during any particular flu season. The process of formulating the flu vaccine every year is an attempt to predict which subtype strains will become predominant. The predominant viruses can differ year to year; therefore, the vaccine that comes out each year is the one experts think most closely covers the predominant subtypes.

Influenza symptoms commonly include body aches, fever, and coughing. Though it may take a few days for the virus to cause illness after a person is exposed, the flu symptoms can come on quickly, even over a few hours.

Exposure occurs from the virus particle being carried in the air, usually over very short distances, in the fluid droplets from a cough or a sneeze. These droplets land on a surface and can be picked up by touching the surface and then inadvertently touching the mouth, nose, or eyes.

What sets influenza apart from other infections is its ability to spread very quickly through a population. In our modern times, with people being able to travel long distances very quickly and spending the majority of their time inside around many other people, the risk for the disease to spread quickly is heightened.

2. The flu is seen as just a bad cold to some, but what are some complications that can arise from getting the flu?

Influenza infection is much more severe than the common cold, causing missed days from work or school due to the severity of symptoms. However, the flu can also lead to secondary infections such as pneumonia that can result in hospitalization or even death. Worldwide, every year, there are 3 to 5 million cases of influenza, and from 250,000 to 500,000 deaths. Populations most at risk from a severe case of influenza are children, the elderly, and those with medical issues that keep their immune system restricted, such as those receiving chemotherapy.

3. What are some benefits of getting the flu vaccine?

The influenza vaccine for each season usually becomes available in the late summer well before the flu season officially starts. Once the vaccine is given, the immune system reacts by making antibodies. It is crucial to know that the vaccine does not prevent someone from getting the flu. You can still be exposed to the virus, and it can still enter your body. However, if someone is exposed to the flu later in that season, the heightened immune system can recognize the virus early and stop it from progressing into a more severe illness. This immune process following vaccination usually takes a couple of weeks, so it is best to get the flu shot early in the season.

4. Where are flu vaccines administered?

Patients can receive a flu shot at their primary care doctor's office, many urgent care centers, and most pharmacies. Some companies may arrange to bring in medical staff to administer flu shots as a part of a company's health and wellness plan.

5. What are the reasons to avoid the flu vaccine?

There aren't many. Everyone older than six months of age is advised to receive the vaccine every year. There are many false claims about the flu shot that have been used by people to avoid receiving the vaccine.

Stop into First Care at SIMEDHealth to receive your flu shot. Click here to learn more about First Care and Dr. Martin.