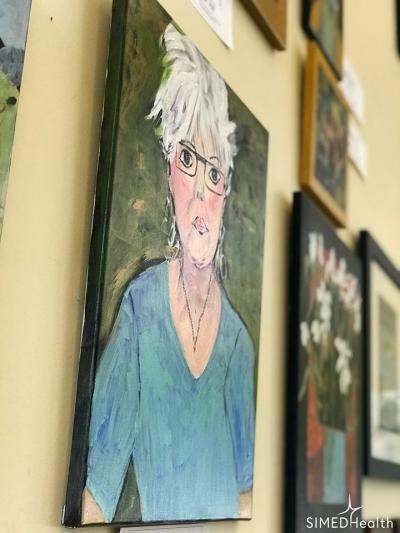 Helen Rucarean seems sure of herself. Her stern gaze is fixed to the horizon while an “H” necklace dangles from her neck. Of course, this isn’t actually her but a playfully painted self-portrait she affectionately named ‘Selfie’ hanging in the lobby of SIMEDHealth’s 4343 location in Gainesville, FL.

Helen loves a challenge. This is evident in the lobby’s gallery. Beside her self-portrait is an abstract painting with splotches of green, blue and membrane-like yellow lines named “map.” Above these paintings in sharp contrast is a dark-colored still life painting with a bowl of fruit on a table named ‘A painting within a painting.”  What draws her paintings together? She signs them with a heart filled with dots most likely pressed by the dull end of her brush.

She paints all that excites her vibrantly and playfully going being between subjects such as live models, still life comparisons and landscapes. She has developed this style of acrylic painting after working with other forms such as oil, watercolor, designing jewelry, and painting on silk.

Originally from Detroit, Michigan, Helen began sketching in pencil as a young child and it has stayed with her to this day. As a student in the 1970s, she joined the Birmingham Bloomfield Art Association. It’s no surprise that when the opportunity to join the Gainesville Fine Arts Association presented itself in 2003, she did not shy away.

Shortly after joining, Helen became a GFAA board member in 2005 and has been an ambassador since 2014. Her collection of work can be found in the lobby of the SIMEDHealth Gainesville 4343 location.