What You Can Do To Keep Your Lungs Healthy 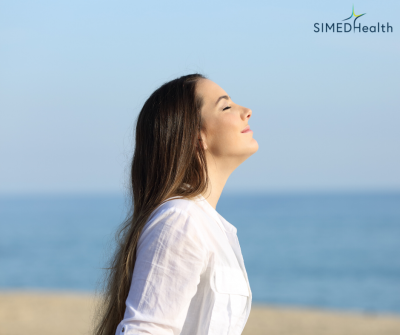 Did you know if you lay a pair of lungs out flat, they will cover the size of a tennis court? October is Healthy Lung Month, and we talked to a SIMEDHealth Pulmonologist about some common lung diseases, their symptoms, and what everyone can do to keep their lungs healthy.

1. What are some common lung diseases and what are the symptoms to look out for?

COPD stands for Chronic Obstructive Pulmonary Disease. It is an umbrella term used to describe different lung diseases that cause breathlessness, along with other symptoms. It is a common and generally preventable disease, yet there is no cure. COPD encompasses a combination of characteristics like airway narrowing (otherwise known as Obstructive Disease) and alveolar damage (otherwise known as Emphysema). The most common symptoms include shortness of breath, chronic cough, and fatigue.

Chronic bronchitis is one type of COPD. Bronchitis occurs when the bronchial tubes narrow due to irritation.  The irritation makes more mucus, which then leads to more coughing, shortness of breath, and an ailment that could become chronic. The bronchitis is classified as chronic after three months. The most common symptoms are cough productive of mucus and shortness of breath.

Emphysema is another type of COPD that damages the alveoli. Alveoli are small sacs in the lungs that exchange oxygen and carbon dioxide to and from the bloodstream. Damaged alveoli do not take in oxygen as smoothly. This can cause a feeling of shortness of breath because it becomes difficult to breathe out.

In some instances, a CT scan of the chest can test for Emphysema, along with Pulmonary Function Tests. The most common symptoms are shortness of breath, either with physical exertion or rest, and low oxygen levels.

Pneumoconiosis is another umbrella term given to lung diseases that are usually caused by occupational exposure to silica or coal dust particles. Early on in the disease, patients may not see any symptoms. Still, eventually, they should experience coughing, chest tightness, and shortness of breath.

2. What is the most important thing a person can do to keep their lungs healthy?

The most important thing you can do is to avoid smoking and other inhalation injuries. If you do smoke, seek help to quit now. According to the American Cancer Society, about 11.4 million people are diagnosed with COPD. About 80 to 90 percent of COPD deaths are attributed to smoking.  If you work in a job where exposure to dust and fumes is unavoidable, it is essential to wear protective respiratory equipment.

If you are worried about the health of your lungs, make an appointment with one of our Pulmonologists today!